I come alive when I get out of my own way. After I had a Cerebral Hemorrhage back in 2017, my physiology changed. I will call this health challenge “The Event” moving forward. A turning point in my life that was on the level of how an earthquake shakes up the landscape. I spontaneously developed different habits and goals for my life. And it changed the kind of person I was destined to be. New habits sprung up automatically and without any prompting: a daily morning regiment, increased productivity in my pursuits, an unending peace, and a lack of fear for the future that I cannot explain. I enjoy habits that bring on new pursuits, but I still carry this overwhelming feeling of loss with me everywhere I go. I believe “The Event” created a sole soul purpose within me, to become a new man. One that is patient, kind and understanding.

I have noticed throughout my life that certain mental states have this quality of frustration, pushing me to my limits. Or at least I allow this mental force, to push me into places that I’d rather not go. My first thought was to get out into the woods. How I missed walking in the woods and listening to that deep sound of silence. So one weekend instead of doing my normal routine, I packed up my gear and headed out to Armstrong Woods, in Guerneville, CA.

My journey started on the East Ridge path.

How utterly quiet this forest is. The only sound is the wind, and an occasional squawk from a bird. I look back at the parking lot, wondering when I am going to return. Will I get lost this time? I think not. I get to the first turn, stopping in the middle of the path, hoping to see some sign of a Raven (a sign I associate with interpersonal change). As I look for photo opportunities, two men in their sixties walk past me. One says to me, “A man after my own heart, one who takes his time.” I laugh as they pass, there is irony in that statement. Most of my life, I was rushing from one experience to the next, paying little regard for the importance of the moment. I’m learning, that life is really about giving more than taking.

After the two men pass, I look around again. I see two Redwoods growing out of the same place on the earth. They reach into the sky, drawing strength from each other. Redwoods often grow as close together as possible to protect each other from the elements. I almost lost my balance on the steep incline, trying to pano-capture the pair with my SmartPhone.

I turn back to the path to leave, and see a feather on the ground next to a neighboring Redwood. I’m not sure if it is an eagle feather. Eagle’s are one of the strongest birds in existence. For me, eagle feathers are a symbol of what’s most important in life. I decide that this is a symbol that the universe is much stronger, and bigger than any problem I might have. A humbling feeling sets in.

Farther along the path, I came upon a bench that had fallen over.

This bench will be mended one day, to be a place of peace and rest for weary travelers. It reminds me of my once broken life. Now I stand erect, and unbroken until the ending of the world, carrying myself though these trial-by-fire days. The world is in such a state of change it’s almost unbearable to me. There is so much conflict, but also so much peace in the world to be discovered. The one that gets realized is the one that is fed the most, I gather.

I see a little house in the distance, across the stream. 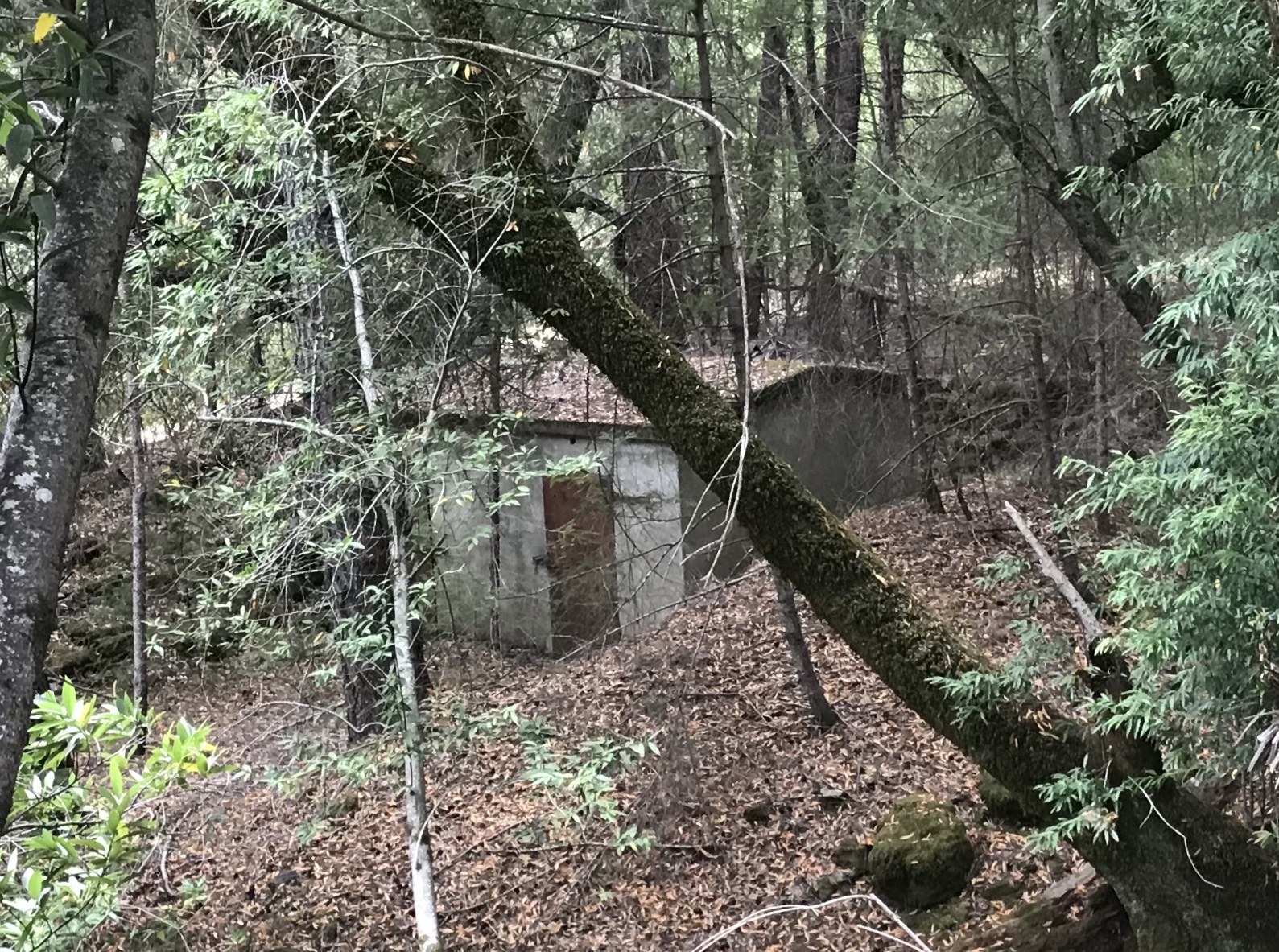 It’s probably a storage shed for the park, but in my mind’s eye, I see a small cabin built on a hill in the forest. A man of the woods arrives. Opens the door, and in the window I see him lay down to rest after a long day. Life in the forest doesn’t require much. Just food, shelter, and a warm hearth. The cabin is right on the edge of a chasm. At the bottom, the sound of a stream can be heard. This day-dream reminds me of a movie, about a veteran that lived in a forest preserve with his daughter. They were caught by some authority figures. I’m pretty sure that the daughter wanted to be caught, she looked tired of living in the wild. They eventually found themselves in a camp where she was able to stay with others. Her father appeared to be uneasy in their new company and wanted to leave, but she stayed. He went back into the wild deal with his demons, and the daughter stayed behind. The community left food out for their lost loved ones. Life is best when we are free to deal with our personal demons, on our own terms, without the forced interference of a sick society. A society that uses violence to wall off what we do not understand, so we don’t have to remember how lost we have become.

I found a stone sitting area, it reminded me of a relic from a bygone age. This one is missing a fountain in its center. In my imagination, celebrations happen here. A marriage is happening, or a stage play. People are laughing, and enjoying each other’s company. This structure is in the center of a village, where the villagers meet. 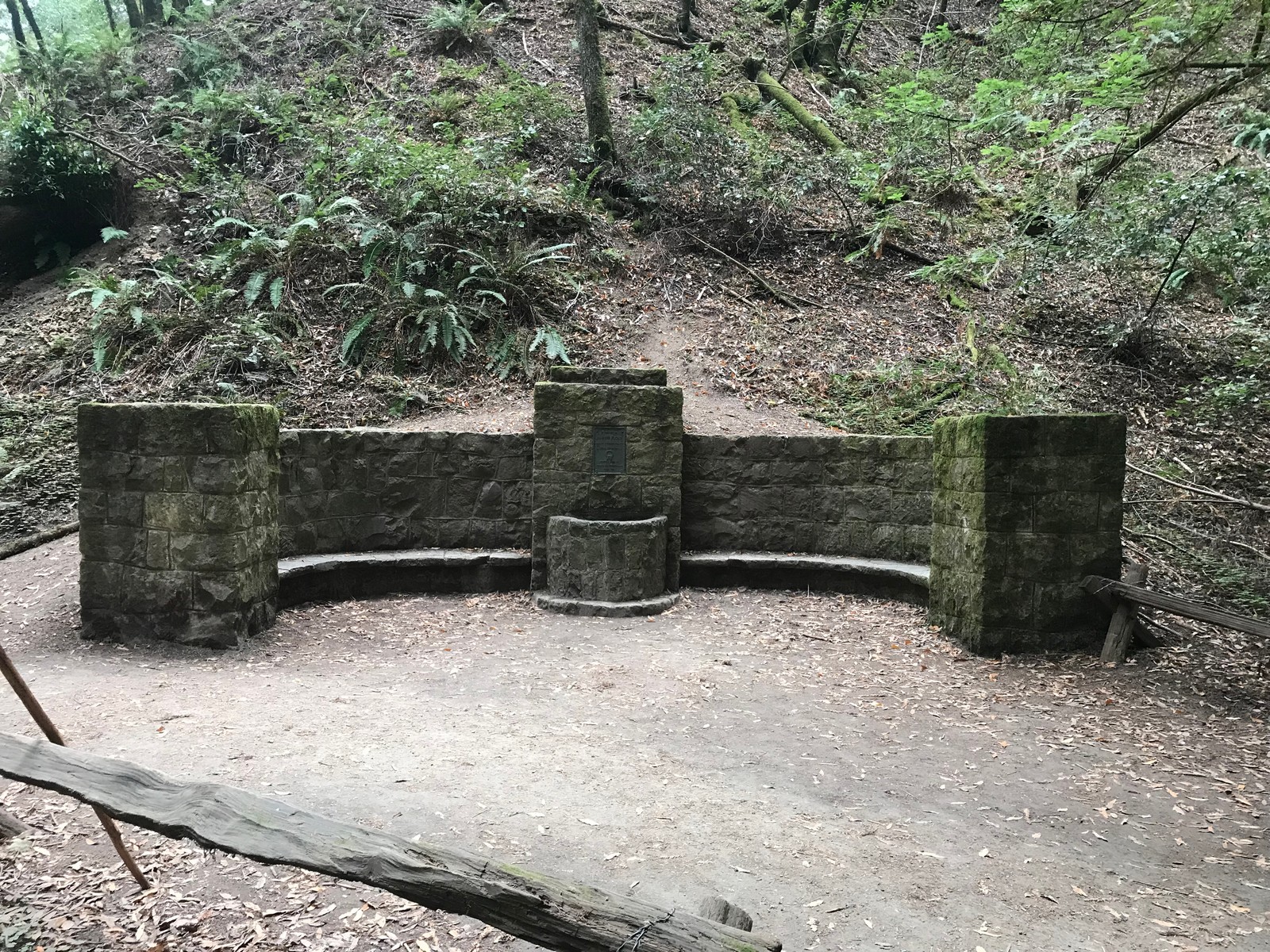 I imagine this Redwood to have a cave at the base of the trunk. I go in, and never come out. But once I’m down there, I go through my own personal trial-by-fire. Whatever is holding me back in my life remains, up on the surface, I find the solution to it here. Underneath the earth, where it’s dark, I come to an understanding with myself. I will take heart, and not take life for granted, as I once did when I was young.

This looks like an outcropping of rock formations, but it’s the roots of an enormous Redwood tree. It’s called “Armstrong Tree” by the park. One day it had enough, and fell over. But it’s still here, after all this time. Just like us. We can fall over, but we get back up, and we can be remembered for what we do after we fall. 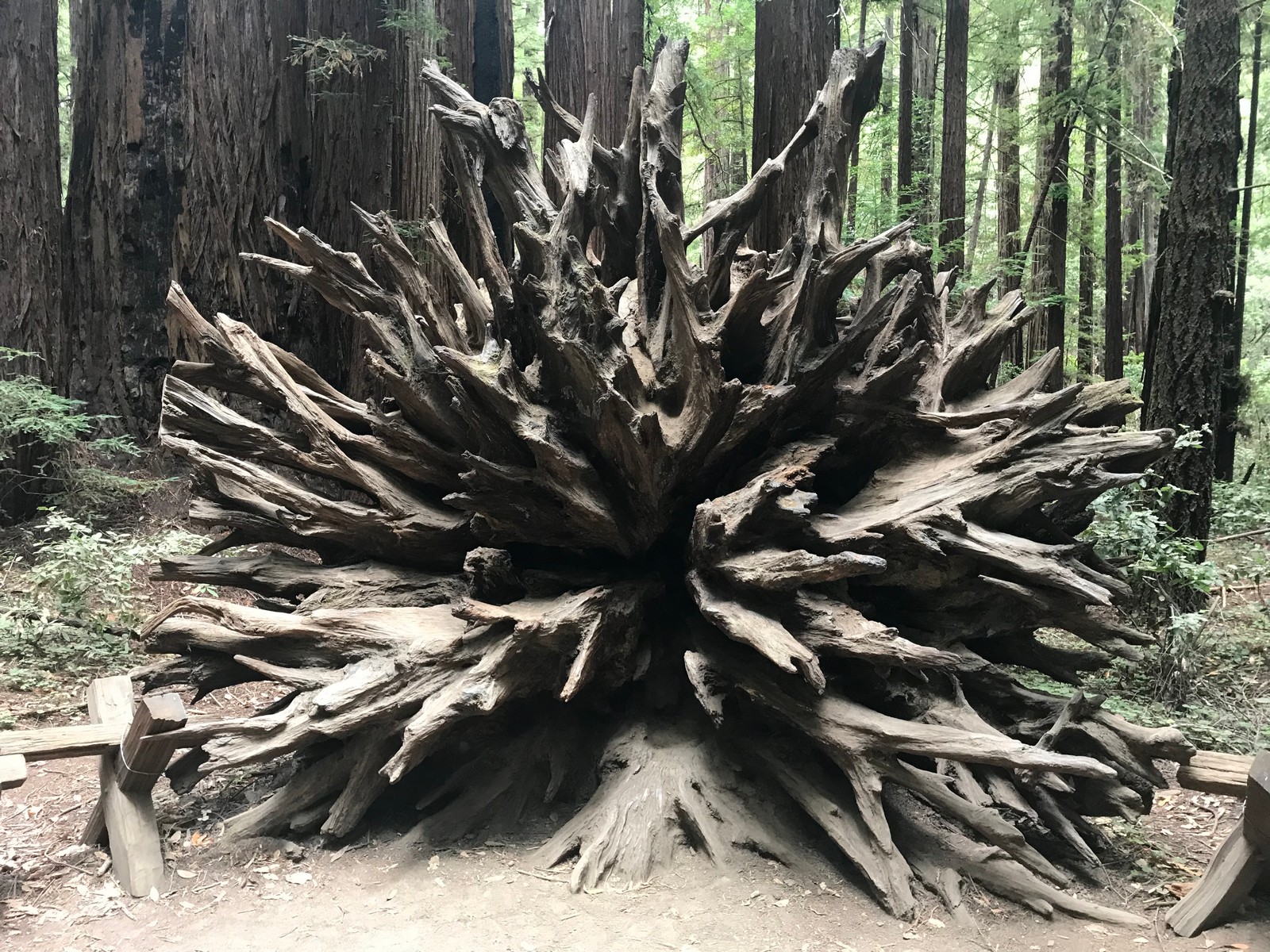 Long ago I did a small study of my last name. The origin of the name “Larson” comes from the historic Scandinavian country of Sweden. The surname “Larson” is derived from the Nordic word Lars, which is a pet form of the name Lawrence. This name is, in turn, derived from the Latin name Laurentius, which means: “Man from Laurentium”. Laurentium is a town in Italy named for its laurel trees. The bay leaf from a laurel tree has healing properties and Native Americans used it to heal many maladies. I find the connection between the name and the tree very interesting, as the smell of the leaf always brings me peace.

A real-life starts with being patient like these trees, kind like the wind, and understanding like the elderly men I met on the path. I grieve for something lost on the path of my life, but the discovery of what is true and vital to my wellbeing brings me closer to that piece of myself that was lost long ago.

This piece would not have been possible without the help of the Mankind Project. After “The Event”, I was led to Mankind Project’s New Warrior Training Adventure where I discovered my calling. The Mankind Project is an organization that helps men become ethical creators of life in this modern age of decadence.

You can discover more about what MKP’s New Warrior Training Adventure is like by reading my testimonial about the effect this event had on my life. If you want to know what happened to me before all of this, check out my book “Most Improved” and Contact me if you have questions.